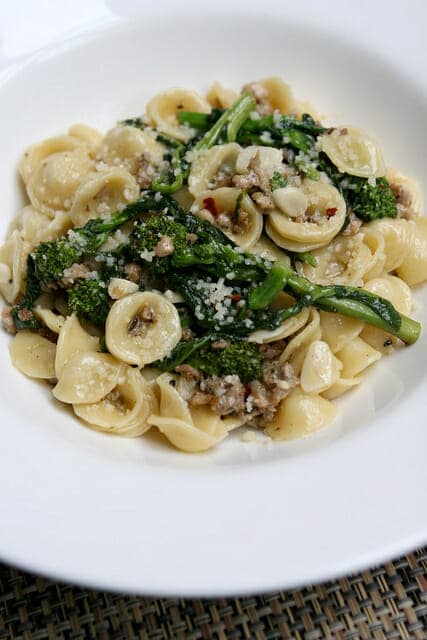 The region of Puglia, on the heel of the Boot, is a great destination for foodies as one of the best places to eat in Italy.

Predominantly agricultural and among the most productive regions in the country, Puglia produces  40% of Italy’s olive oil as well as a significant proportion of wine. The region’s cuisine is deeply rooted in “cucina povera” (loosely translated as “peasant cooking”) and consists of simple dishes with seasonal, local ingredients. Puglia still remains largely unspoilt by mass tourism and many small restaurants, trattorie and osterie serve genuine traditional dishes.

The most famous pasta dish from Puglia is orecchiette con cime di rapa, ear-shaped pasta (hence the name “small ears”) cooked with turnip greens. The pasta itself is made with only three ingredients: durum wheat flour, water and salt. Another dish that has been around for centuries is friselle con pomodori. Bagel-shaped bread double baked in a stone oven was perfect for poor peasants as it could be stored for long periods. Just like in the old days, friselle are dipped in water, seasoned with salt, dressed with olive oil and served with ripe delicious chopped tomatoes and herbs.

Puglia has a great tradition of cheese making. Burrata di Andria, soft cheese made from fresh mozzarella and cream that is eaten within 24 hours of production, cacioricotta, canestrato, Fallone di Gravina, – each small town has their own variety to boast.

A small town of Altamura is famous for its delicious bread and is the first town in Europe to receive a D.O.P. classification (Denomination of Origin of Production) for its bread.

The region’s fishing traditions mean that there is always plenty of seafood on the table. Among the best places to eat in Italy there are the restaurants in seaside towns such as Gallipoli, Otranto, Brindisi and Taranto that always have fish on the menu. Mussel soup Taranto-style (cozze alla Tarantina), Gallipoli style fishsoup (zuppa di Pesce alla Gallipolina), mussel soup Lecce-style (cozze alla Leccese), sea urchins (ricci di mare) are among the best local fare.

When it comes to wine, you will be spoilt for choice: Salice Salentino, Squinzano, Primitivo di Manduria, Aleatico di Puglia and many others are considered to be among the best Italian wines.

Unique recipes, fresh ingredient and outstanding wines..it is not hard to understand why the Puglia region is considered one of the best places to eat in Italy!