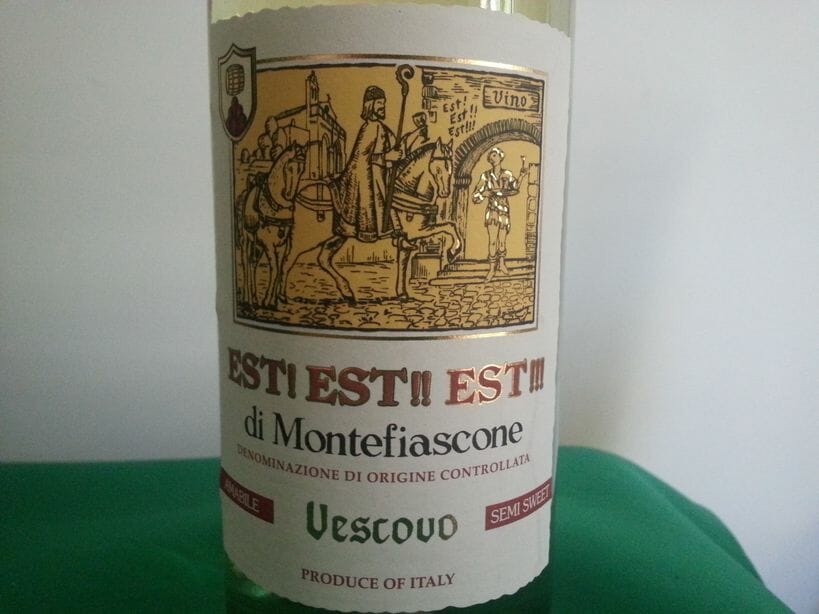 A pit stop in Montefiascone accompanied by a tasting of its famous white wine Est! Est! Est! is one of the tours suggested by Road to Italy. This short visit is ideal whether you are travelling from Rome to Florence by car or you find yourself in Rome and are looking to go on a short excursion.

Located on a hill which dominates Lake Bolsena, roughly 65 miles north of Rome, Montefiascone has a beautiful historical centre dating back from the Middle Ages. There are many things to see and visit while strolling through the town: the Rocca dei Papi, built in the second half of the 1200s; the Cathedral of St Margherita, easily spotted from anywhere in the city given that its majestic dome is the third largest in Italy; and the Basilica of St Flaviano, built in the 11th century in the Roman-Gothic style. In the third chapel, on the left aisle of the Basilica, there is a gravestone in the honor of Giovanni Defuk, a name tied to the history of Montefiascone’s wine.

Legend tells that in 1111, Henry V of Germany was travelling to Rome to be crowned emperor of the sacred Roman Empire. Among his considerable following was a bishop, Giovanni Defuk, who was more interested in earthly pleasures than the divine. Giovanni was a connoisseur of good wines. His arrival was always preceded by Martino, a servant tasked with scouting taverns and wine cellars and marking the ones stocked with good wine. He would do this by writing “Est” on the door of the establishment, which in Latin means “it is” –as in, “the wine is here”.

When Martino came to Montefiascone, he found the wine so good that he wrote “EST! EST! EST!” three times. Giovanni heeded the servant’s advice, who then decided to remain in Montefiascone while the bishop carried on and spread word about the wine.
To this day, during the month of August, Giovanni Defuk is remembered with a grand celebration and a parade in traditional costume. This is Montefiascone’s way of celebrating their first and most important tourism “sponsor”.

Born from this legend, EST! EST! EST! is a white wine produced on the fertile hills that surround Lake Bolsena. Straw-coloured with greenish gold highlights, the wine is obtained with a mix of Trebbiano, Roscetto and Malvasia grapes, resulting in a fresh and well-formed wine thanks to its crisp acidity. It has a very pleasant aroma with clear vegetal and fruity notes.

EST! EST! EST! was one of the first Italian white wines to be bestowed the mark of Designation of Protected Origin (D.O.P.) in 1966, although its consumption and popularity remained relatively limited to the local population.

In the last few years however, large companies well-versed in the wine market and with a wide commercial network also began producing this wine, and so EST! EST! EST! increased its presence in the internal and European markets. Now, consumers near and far from Montefiascone can appreciate this fascinating wine. Consider visiting Montefiascone and taste EST! EST! EST! for yourself on your next luxury tour of Italy!