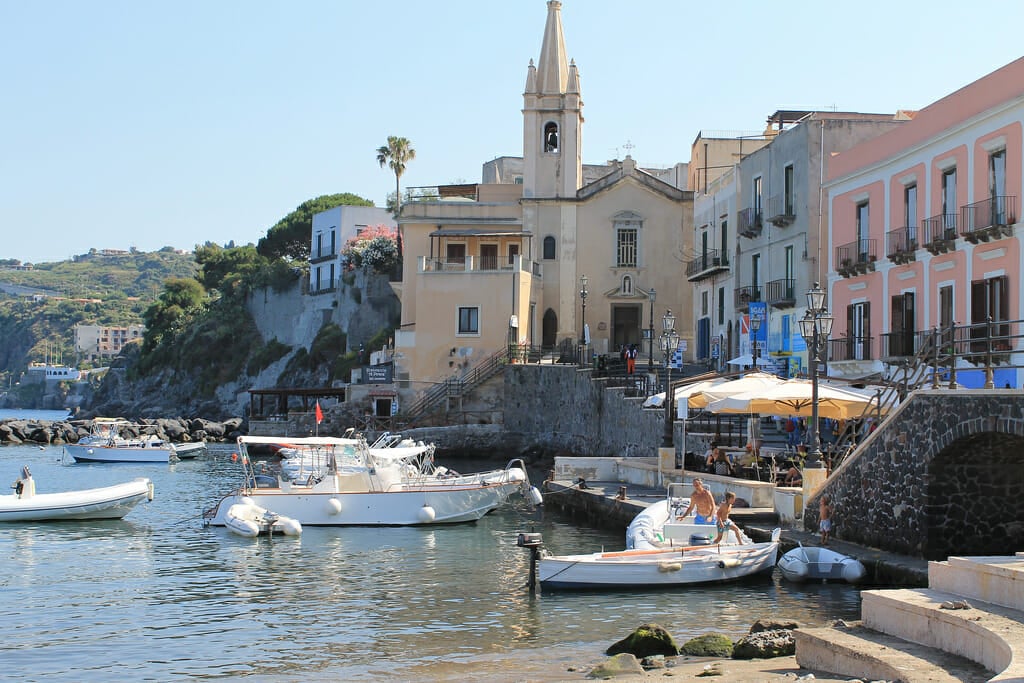 What to see in SIcily ? Black-sand beaches, rocky coastline, smoking volcano craters and stunning sea views, – all that is the Aeolian Islands, the volcanic archipelago off the northern coast of Sicily.

With each of the seven islands being very distinctive, the archipelago is one of the major Sicily tourist attractions that captivates a wide range of visitors: from those seeking simplicity and peace to the ones, who love to splash out on a luxury tour.

Lipari is the largest of the Aeolian Islands and the most populated. Although in July and August it gets quite crowded here, the beauty of Lipari is undeniable: the fortified acropolis, lovely harbor of Marina Corta, some great walks and the colorful kaolin quarry at Bagnosecco where sulfurous fumaroles (cracks in the ground that emit steam and gases) stained the soil in crazy orange, indigo, and green.

Vulcano is packed with hotels restaurants and famous for the wonderful mud baths (Fanghi di Vulcano) and its smoking crater. A hike to the top of the active volcano takes less than an hour and is certainly worth the sweat.

If you have seen the Italian movie Il Postino, you will know how beautiful and green the Salina island is (Il Postino was filmed in the village of Pollara). Lazy on the black-sand beaches, sip the local sweet wine Malvasia and climb Monte Fossa delle Felci, the highest peak in the archipelago, – not a bad plan for a vacation!

Panarea is the most fashionable of the Aeolian Islands, where the rich and famous flock in August. The hotels, boutiques and restaurants are achingly expensive and strive to offer the best. Once the international jet-set leaves, the island becomes sleepy and quiet. It is said to be the most beautiful island of the archipelago, with its dark gold sandy beach of Zammarà, spectacular bay of Cala Junca and pretty offshore islets reachable by boat.

Stromboli houses one of the most active volcanoes in Europe attracts many visitors. After the heroic ascent to the top of Stromboli, you can chill out in one of the black-sand coves on the island.

Another answer to what to see in SIcily  is about Filicudi and Alicudi. Those looking for peace and quiet head to Filicudi and Alicudi, the smaller remote western islands. Unspoilt by mass tourism they still retain the old-days traditional ways of life: you can still see the locals using donkeys to get around. Enjoy simple pleasures, far away from the hassle and bustle: swim in the crystal clear water, bask in the sun on a pebbly beach and devour delicious seafood.