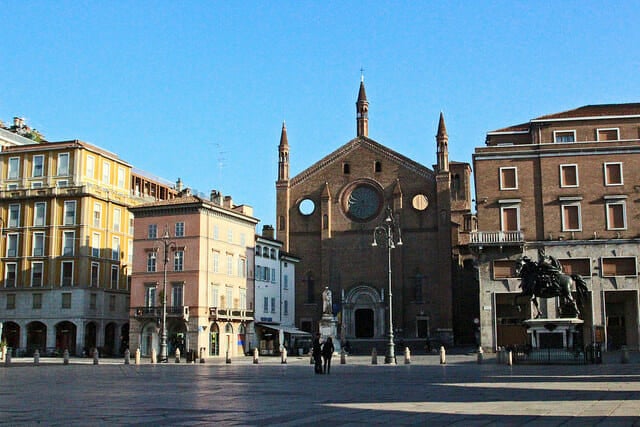 A short drive from Milan, in the centre of the fertile Padana Valley, lies the beautiful city of Piacenza. Surrounded by well-preserved 16th century city walls it boasts some great architectural gems and historic attractions and is well worth a visit on your custom vacations in Italy.

Piacenza’s central square, Piazza Cavalli, is dominated by splendid Il Gotico, late 13th century town hall with pink marble arcades and frescoed main hall. The two equestrian statues of Alessandro Farnese, Duke of Parma and Piacenza in the late 16th century, and his son, Ranuccio I Farnese, remind of the city’s rich and glorious past. The narrow streets of the historic centre are lined up with noble mansions: Palazzo Landi, Palazzo Farnese, Palazzo Costa and many others.

Il Duomo, the city’s main cathedral, dates back to the 13th century and has stunning frescoes by Guercino. There are several churches on Piacenza that are brimming with timeless masterpieces: the Romanesque Basilica of Sant’Antonino, the San Francesco Church. Don’t miss the Early Renaissance church of San Sisto that had the altarpiece known as the Sistine Madonna painted by Raphael. Although, the masterpiece was sold to the King Frederick Augustus II in the 18th century, the church has other treasures that will leave you in awe.

Built in the 19th century, The Municipal Theatre of Piacenza looks like a scaled down La Scala in Milan and is considered one of the most beautiful theatres in Italy. There are also an excellent Archaeological Museum and a Modern Art Gallery in the city.

Food is one of Piacenza’s main attractions. Some of the best D.O.P and D.O.C cured meats, cheeses and wines in Italy are produced in the area around the city. Pancetta (rolled seasoned pork), coppa (seasoned pork matured for six months), various salami, gorgonzola cheese are delicious. Try turtéi, traditional pasta filled with ricotta and spinach, “pisaréi e fasö” (pasta with beans), bortellina (salted pancakes). The hearty dishes in Piacenza are washed down with good local wines such as Gutturnio or Bonarda.