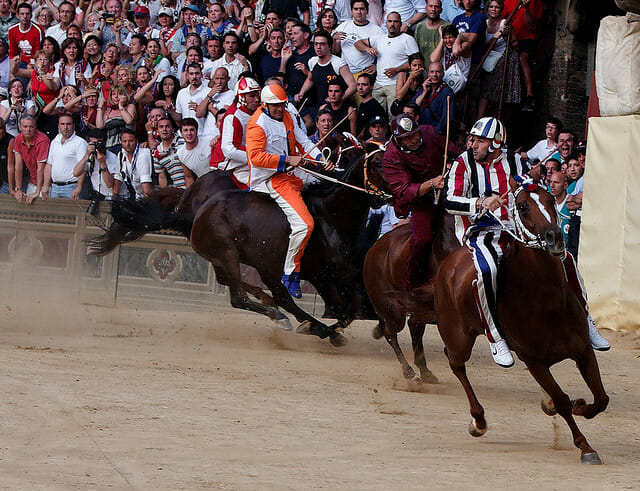 Siena is one of the most popular and beautiful places to visit in Tuscany. Rich in art, history and local traditions this Tuscan town will steal your heart.

In the square, you can admire a copy of the Fonte Gaia, the fountain made in Carrara marble and originally decorated with beautiful sculptures by Jacopo della Quercia. The original fountain is on display in the museum of Santa Maria della Scala.

Piazza del Campo is flanked by the Town Hall (Palazzo Comunale) and the Torre del Mangia. The brick and marble building of Palazzo Comunale houses the Civic Museum where you can admire some masterpieces by Sienese artists. One of them is the renowned cycle of frescoes “Good and Bad Government” by Ambrogio Lorenzetti. Commissioned by the city council in the 14th century, the frescoes depict a peaceful well-governed city, and on the opposite side a tyrant-ruled Siena in ruins.

From the Torre del Mangia open spectacular view of Siena and the surrounding countryside, which are worth the exhausting climb over 400 steep and narrow steps.

In Piazza del Duomo stands the majestic 12th century Cathedral of Siena with elaborate mosaics, frescoes by Pinturicchio, a bronze statue by Donatello and other Renaissance masterpieces. Near Il Duomo you will find Santa Maria della Scala, one of the oldest hospitals in Europe, that for centuries took care of pilgrims and poor orphans.

After all the overwhelming cultural feast that Siena has to offer you might want to refuel on delicious local dishes that are served in the town’s restaurants: ribollita soup, pappardelle pasta, wild boar and hare, washed down by excellent Tuscan wines and followed by sweet ricciarelli, Panforte or cantucci biscuits with the classic Vin Santo. It is easy to understand why Siena is one of the best places to visit in Tuscany.